Amy Schumer evidently did not share the comedy gene with her cousin.

Sen. Chuck Schumer clanked a joke Sunday at the Gotham Comedy Club, where he took the stage alongside Jerry Seinfeld to advocate for federal funding for city performance venues hit hard by the coronavirus.

Perhaps channeling his inner Kenny Bania, Schumer launched into the fumbling set-up of the bit before a socially-distanced audience of reporters and aides.

“Mrs. Walters is brought before a judge, and the judge rolls his eyes,” Schumer began, as a masked Seinfeld looked on from the side. “He says, ‘Mrs. Walters, you’re back.’”

Yada yada yada, Walters is a known kleptomaniac accused in the most recent case of shoplifting a can of four peaches from a local store.

“I have no choice, I’m going to sentence you to four nights in jail, one for each peach,” Schumer quoted the judge as decreeing.

“He’s about to bang the gavel and pronounce [his] sentence when a gentleman in the middle of the room gets up, all agitated,” said Schumer. “‘Your honor, your honor, may it please the court, I’m her husband. She also stole a can of peas!’” 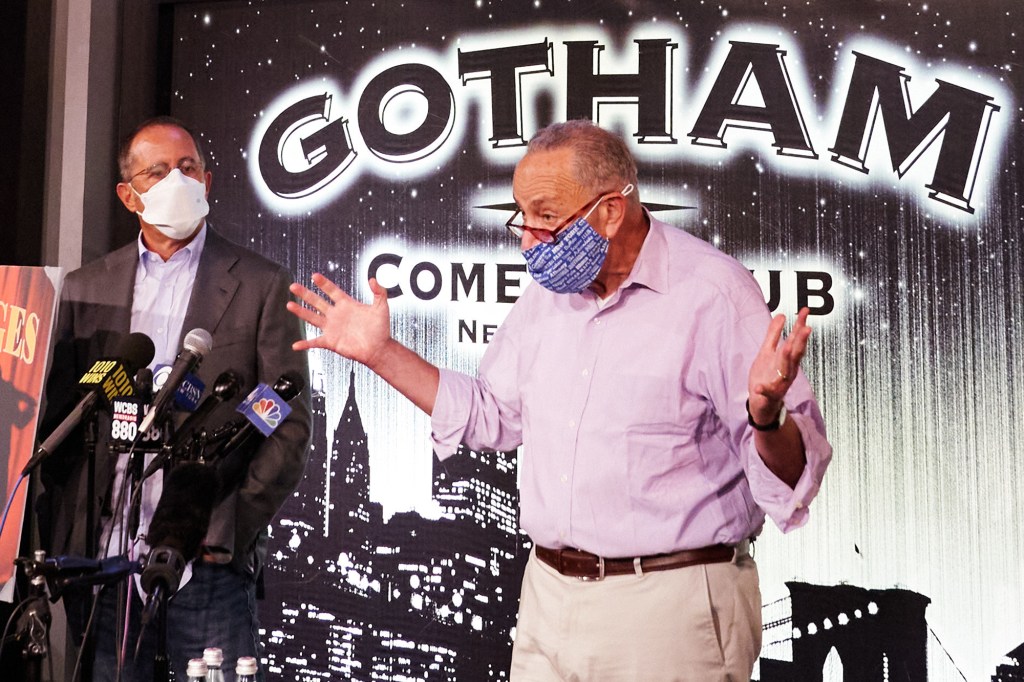 Sen. Chuck Schumer telling the joke on stage next to Jerry Seinfeld. 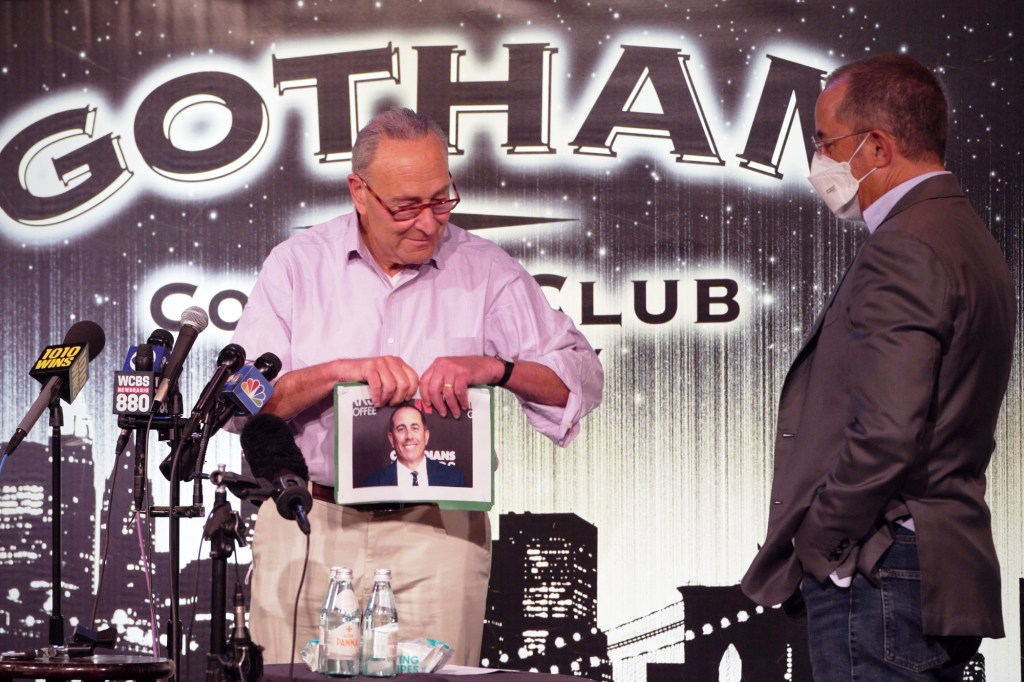 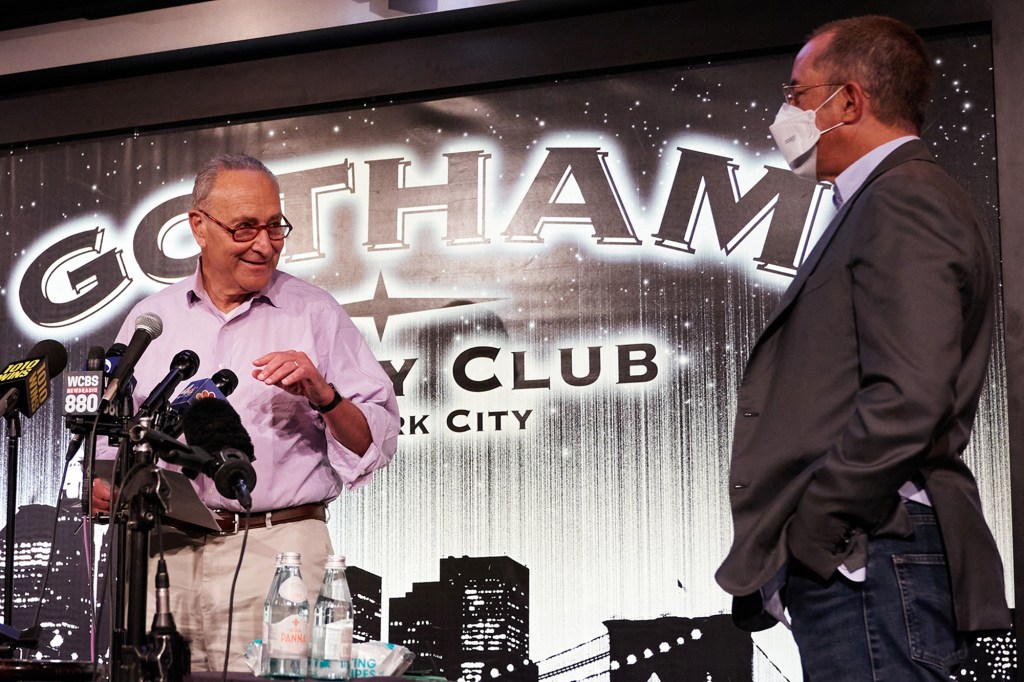 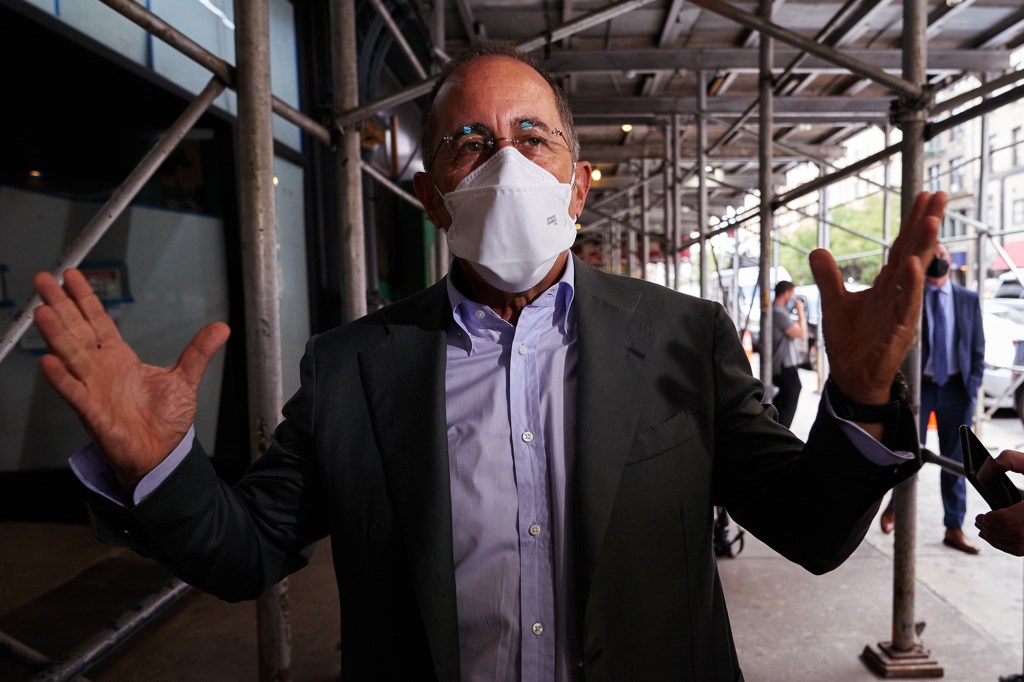 It was a chance to reset the series, make up…

The punchline elicited only a smattering of chuckles from the tough New York crowd and a few seconds of silence from Seinfeld, before he threw his head back with a sharp laugh and explained the joke to the audience.

“I see. Because there’s more peas in a can of peas,” Seinfeld spelled out. “So she’d be in jail longer. Because she’s annoying him.”

The seasoned stand-up then gave a more hearty laugh, before generously pronouncing the Senate minority leader on his way.

The pair came together to tout the bipartisan Save Our Stages Act, which would free up $10 billion in federal funding to help small performance venues shuttered by the coronavirus stay afloat.